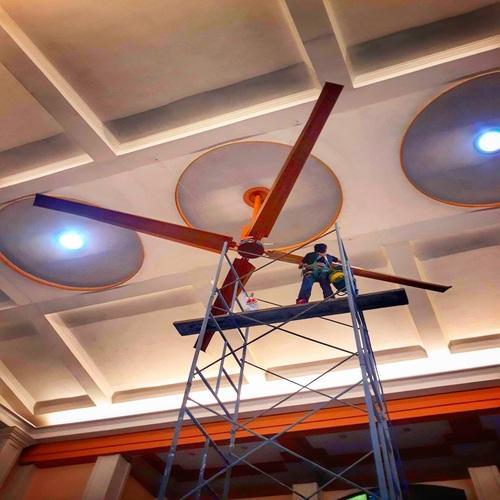 High-volume Low-speed fans without gears are referred to as Gear Less HVLS Fans. These fans are larger than seven feet in diameter and are normally mounted directly from the ceiling or a little down if the ceiling is quite high. These fans travel slowly, with a maximum speed of 200 RPM and a speed of less than 60 MPH at the fan blade tip, as the name implies.

Gear Less HVLS Fans Manufacturers have been spotted in local gyms, ballparks or stadiums, and airport terminals. HVLS fans are large, slow-moving fans that silently circulate the air, and we'll take a closer look at them in this article. We'll go over how Gear Less HVLS fans function, and some of the other advantages of employing them.

Gear Less HVLS Fans Suppliers clearly explain the function of these fans. When cool air flows over the body, it breaks up the moisture-saturated boundary layer and speeds evaporation in order to create cooling effects. When ceiling fans turn, they create a column of air. Along the floor, this column of air flows down and out. This deep wall of horizontally moving air, known as a horizontal floor jet, is proportional to the fan's diameter and, to a lesser extent, its speed. When the floor jet reaches its maximum capacity, it migrates outward until it encounters a vertical surface such as a sidewall.

In terms of diameter, rotational speed, and performance, commercial HVLS ceiling fans differ from domestic ceiling fans. While some fans use modern blades to move air, other ways, such as Airfoils, are being used to make it more efficient. Gear Less HVLS Fans Exporters make sure the fans reach the customers with all these qualities. At the same speed, larger fans may move more air than smaller fans. A chaotic, high-velocity air jet swiftly disappears. Because of the friction between moving air and stationary air at the moving column's edge, a large column of air "travels" farther than a small one.

Gear Less HVLS Fans in India are well-made by S A Engineering Corporation and have wide usage. The diameter of an air column has a direct relationship with its perimeter. While the cross-sectional area grows in proportion to the square of the diameter, the huge column has fewer peripheries and thus less drag.

We are engaged into manufacturing of BLDC, HVLS, High speed low speed gearless fans for Industrial and commercial needs covering large space and having high efficiency.